It starts with a series of meetings dedicated to gender identity. The thoughts and actions shared in the meetings constituted the genesis of the project, which is now formalized in a singular exhibition itinerary.  The preview will be anticipated by a meeting with Chiara Frugoni.

“Chiara with respect to Francesco. Chiara, the most faithful follower of Francesco, very brave, tenacious and very human, adored by her sisters”.

“The series of meetings Sui generis, developed from a dialogue practice undertaken with Chiara Camoni and Cecilia Canziani in summer 2018, is articulated in a project commissioned by Le Murate. Progetti Arte Contemporanea in collaboration with the Region of Tuscany in the desire to promote new ways of ‘making art. The production experience is thus no longer compressed in the exhibition format, but open to forms of greater scope, enriched by an open and evolving dialogue and by a reflection that has jealously demanded a long and articulated temporal cadence“. Valentina Gensini

“During the seminars we reasoned around the idea of gender as asymmetry, of work and thought as collective practices starting from the sharing of dedicated time and space. The space in which we worked is that of Le Murate, which was originally a cloistered convent, therefore a place of separation from the world, but also a place of relationship, common life and emancipation through reading and craftsmanship. In this sense the notion of domestic space, of inhabited and not abstract space, of space to be built, is at the basis of the seminars and the exhibition“.  The curator, Cecilia Canziani

The exhibition will be open to the public from 6 June to 5 October 2019 | Tuesday – Saturday 2.30 pm – 7.30 pm Under the patronage of Regione Toscana.
With the contribution of Fondazione Cassa di Risparmio.

Project carried out within the framework of Toscanaincontemporanea2019 with the support of Regione Toscana.

Chiara Frugoni’s research has been a source of inspiration throughout the whole project with similarities between the place and the reflections of the seminar and the themes she dealt with, on  Chiara of Assisi and on the role of the convent as a place not only of exclusion, but also of emancipation.

The course was developed in three moments: collective readings, a public lecture and finally, to give a rhythm to the thought, the collective action of the work at the loom, to which – over the course of the months – many different hands of craftswomen, artists and curators have alternated, leaving traces of their work, creating a carpet that is also the fulcrum of the exhibition. Since it is not possible to narrate the seminars in the form of an exhibition, Self-portraits represents an attempt to redistribute, through a series of works and further moments of in-depth study, the sense of a constructed path of relationships between people and areas of knowledge, with the words of books and the works of different and distant authors.

The works by Chiara Camoni and Bettina Buck in the exhibition invite us to reflect on the relationship between body and space, on the way bodies build environments, gestures generate worlds, worlds tell relationships, and relationships are a way to reinvent the ways of being together, producing, exhibiting.
The gestures and voices of those who participated in the meetings are guarded and represented by a carpet presented in the exhibition and woven under the supervision of the weaver Paola Aringes.

Around this object, which is also a place, a corpus of unpublished works by Chiara Camoni makes room for the works made by Bettina Buck between 2010 and 2017.

United by a common reflection on sculpture and a dialogical attitude, the works of the two artists offer themselves as points of view on each other’s work. 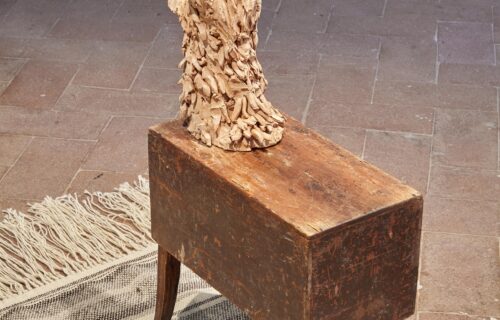 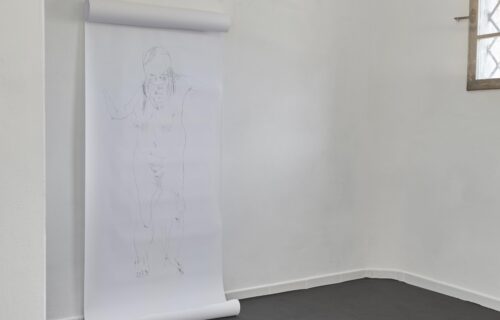 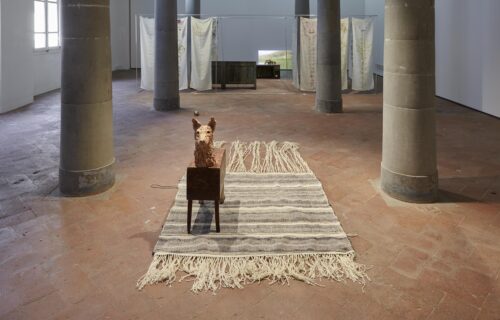 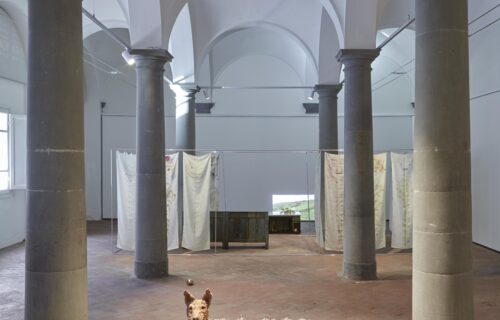 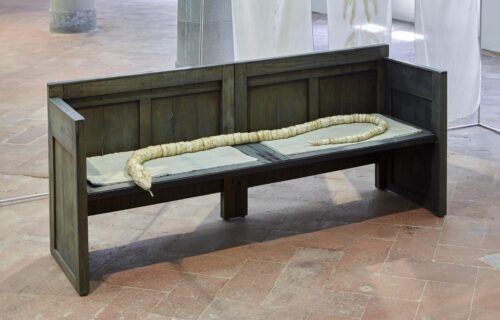 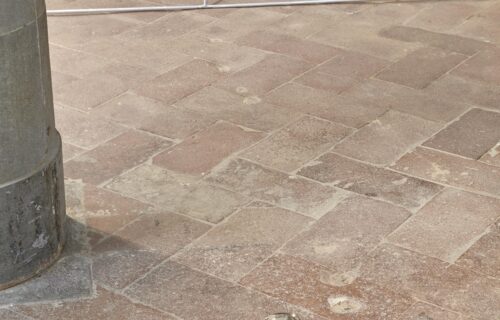 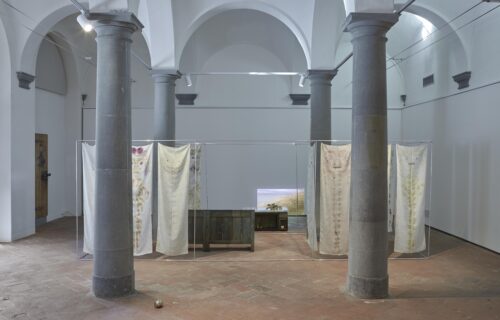 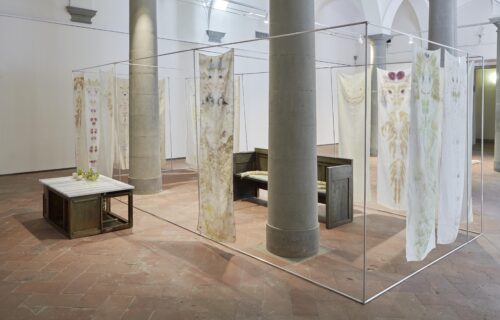 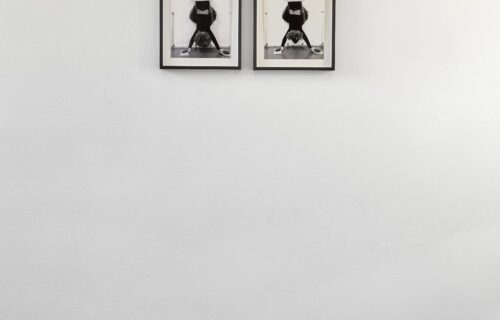 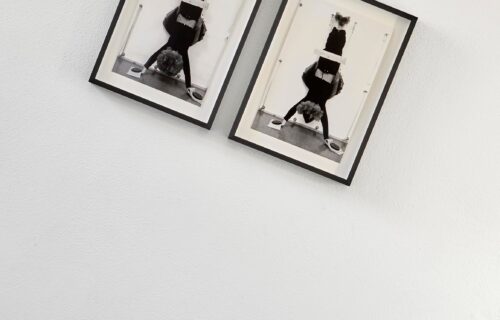 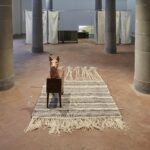 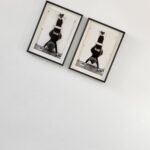 Bettina Buck (Cologne 1974, Berlin 2018) graduated from the Kunsthochschule für Medien in Cologne and then obtained a Masters in Fine Art from Goldsmiths, University of London.  Her research focuses on the notion of sculpture as duration and collapse, chance and transformation. Selected exhibitions: 2018 Raumfolgen, Schloß Burgau, Düren; 2016 City Dance Köln; All Italy is silent German Academy of Villa Massimo and Royal Academy of Spain, Rome 2014 Another Interlude, Performance, Galleria... Nazionale d’Arte Moderna, Rome, To continue. Notes towards a Sculpture Cycle: Scale, Nomas Foundation, Rome; 2012 A House of Leaves, David Roberts Art Foundation, London; 2011 V&A cycle (performance), performance, Postmodernism: Style and Subversion 1970-1990: Friday Late: The Postmodern Look, V&A, London; 2010 Platzhalter, Galerie Monitor, Rome; 2007 Reaparecidos, Museo de la Ciudad, Quito. Between 2009 and 2017 she created five Invite projects, a series of exhibitions structured as a dialogue between her own practice and that of an artist with whose work she felt a relationship of intimacy and confrontation: Cologne, 2009; Berlin 2011; London, 2012; Exeter, 2013; Berlin, 2017. 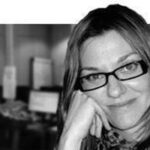 An art critic and curator, her work focuses on contemporary art practice as a questioning of the cultural space and its context and on the teaching of contemporary visual culture. Founding member of the non-profit space 1: 1projects, she teaches at the Academy of Fine Arts in Palermo and the University of Rome La Sapienza. Since January 2009, together with Ilaria Gianni, she has been artistic director of the Nomas Foundation, Rome.