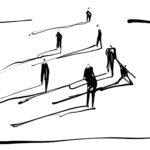 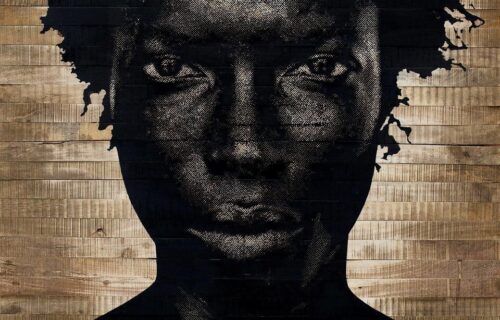 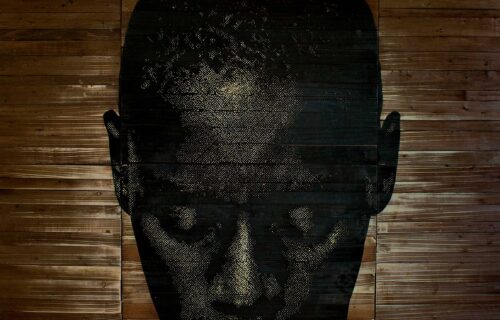 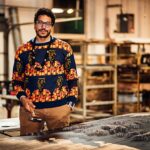 Alexis Peskine’s signature works are large-scale mixed media ‘portraits’ of the African diaspora, which are rendered by hammering nails of different gauge, with pin-point accuracy, into wood stained with coffee and mud. By applying gold leaf to the nails he creates breathtaking composite images. He depicts figures that portray strength and perseverance, with energy reminiscent of the spiritually charged Minkisi ‘power figures’ of the Congo Basin. He also produces... striking photography and video works.

After a 2016 showing at 1-54 Contemporary African Art Fair, London, Peskine had his first solo exhibition at October Gallery in 2017, with major exposure at international art fairs with the Gallery in the following years. Alongside this in 2016, Institut Francais, Dakar, Senegal held Raft of Medusa: Le retour de la vague, a solo exhibition of Peskine’s works. In 2018, his works were featured in the exhibition In Their Own Form at the Museum of Contemporary Photography, Chicago and Africa House’s Second Generation exhibition in New York. He has been the recipient of many prestigious prizes including a Fulbright scholarship and Hennessy Black Masters Art Competition award. In the past decade, Peskine has worked with inner-city youth in France, Senegal and Brazil to create a number of monumental pieces, the largest of which was produced in France in 2012. Major museums and collectors including Peggy Cooper Cafritz; Laurence Graff OBE; the New Britain Museum of American Art, New Britain, USA; The Harvard Art Fogg Museum, Cambridge, USA; Pizzuti Collection of the Columbus Museum of Art, Columbus, USA; and Museum of Contemporary Photography (MoCP), Chicago, USA, have collected Peskine’s works.