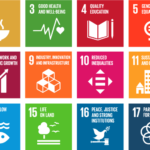 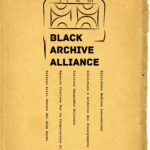 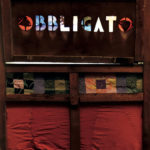 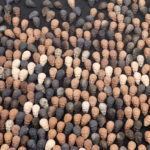 From the meeting of Le Murate. Progetti Arte Contemporanea (now Murate Art District)  and Paolo Masi is born a site-specific project which the Florentine artist has dedicated to this unique space, a space of remembrance, of imprisonment, of voluntary or forced confinement.

Qui. Paolo Masi (from 14 September to 31 January 2019) is an important monographic exhibition comprising twelve monumental works conceived and executed specifically for the Le Murate spaces. The exhibition project grew from the artist’s direct interrogation of the spaces and the history of the city-centre complex in the perspective of a new production. The former prison complex is reread by Masi as a site of remembrance linked to ‘confinement’, whether voluntary (in its time as a convent) or forced (as a prison).

The works on show engage the entire monumental complex, from the interior spaces of Le Murate. Progetti Arte Contemporanea to the public spaces of the complex such as the facade, the fountain in Piazza Madonna della Neve, the interior of the Semiottagono.

The relationship with the spaces of the Le Murate cultural district makes this project a great ‘public work’ reflecting on the history of this particular city site. The exhibition, organised by Mus.E and produced by Le Murate. Progetti Arte Contemporanea in collaboration with Frittelli Arte Contemporanea, is part of Progetto RIVA 2018, curated and directed by  Valentina Gensini. Progetto RIVA is a co-design project benefitting from the contribution of the Sensi Contemporanei project under the project framework agreement among the Region of Tuscany, MiBACT Direzione Generale Cinema and the Agenzia per la Coesione Territoriale. The former cells will host a series of site-specific installations that invite the visitor to reflect on the concepts of confinement and meditation.

The works – conceived by the artist to intentionally make use of ‘hard’ materials such as nails and steel wool, or to scratch and ‘mark’ the walls of the complex – are founded on actions of chromatic matrix and others of materic origin, consistently with the lengthy and structured path through art that has characterised his entire production. His actions in/on the spaces thus become conceptual markers along a course of serried, highly coherent research that doubles back to experimental practices first launched in the Seventies, now presented in a new guise and with an authentic odour, rigorously measured against the spaces.

The exhibition also presents two never-before-seen Polaroid cycles, one dedicated to Le Murate, a space of isolation and reflection; the other to the Arno river, an open, changeling ambience, remindful of a world and a life outside the walls. ‘What most struck me was the aura of the site, where the stone walls carry evident signs of many passages, of cloistered nuns and prisoners,’ Paolo Masi has said. ‘With the Polaroid shots, I have tried to render this emotional visibility. The exhibition centres on pointing up the peculiarities of this space, so different from a gallery or a museum, which, as a production site, allows the imagination room to express itself freely and totally. On my very first visit here, I decided to give concrete form to feelings and emotions on two different planes: the dramatic, on the third floor, where the cells are linked by an extremely coercive history; while on the lower floor, the incised white of the wall, the two large cartons and the three folded papers suggest a geometry that is alternative to the sense of physical ‘enclosure’ that was the original function of the site.’

‘This exhibition project represents a unicum both in the work of Paolo Masi and in the Le Murate. Progetti Arte Contemporanea programming: for the first time, we are entirely ‘occupied’ by an articulated, site-specific work that touches on both the production and residence centre and on the other structures of the monumental complex, embracing even the facades of the main buildings,’ explains Valentina Gensini, artistic director of Le Murate. Progetti Arte Contemporanea and exhibition curator. ‘The production engrossed the centre and the Frittelli gallery for months, while the artist was in residence and working. Masi thus renounced any aspiration to ‘exhibition’ to create a work to the measure of the Le Murate environment; to incorporate the historic and sensible memory of the site within the work. An important challenge, one met with courage, one that pushes us to recreate a meaningful relationship with these centuries’-old spaces and also with our own identity, which favours residence and production as a pondered, socially- and ethically-committed approach extraneous to cultural consumerism. I like to think that Le Murate, where the presence of young people has increased, has welcomed a great ‘senior’ who chose to live some months with us to rediscover the most deeply-seated ‘sense’ of this place and modalities that are radically alternative to the mainstream cultural proposal.’

Born in Florence in 1933, has been active since the 1950s. He studied first in Milan, then in other areas of Europe where he matched wits with other talents and came into contact with the work of the great European abstractionists from whom he learned the lessons of strict formal rigour. In the 1960s, his production shifted from abstract-geometric works to compositions showing an absolute sensibility for colour and, in the 1970s, to research and use of new materials. His works of this period are characterised by use of corrugated cardboard. In the works of the 1980s, he undertook intense research into colour in relation to space, creating works from which colour as a strong aspect of his personality is easily deduced. In the 2000s, Masi began using such new materials as Plexiglas, with which he has created rectangular and round works in brilliant colours. Since his early experiences with Informale painting and concrete abstractionism, Masi’s work has been articulated, complex and diversified at the technical-linguistic level. His works become conceptual markers in the landscape and, in the case of his Polaroids, act as analytic studies of urban codes. His intensive activity continues and is acknowledged both in Italy and abroad; his works are featured in the collections of MART of Rovereto, the Galleria d’Arte Moderna of Palazzo Pitti in Florence and the Galleria d’Arte Moderna of Turin, the Museo Pecci of Prato and the Museo Novecento of Florence. His works are all characterised by an unceasing experimental evolution capable of extending even to broad urban spaces. 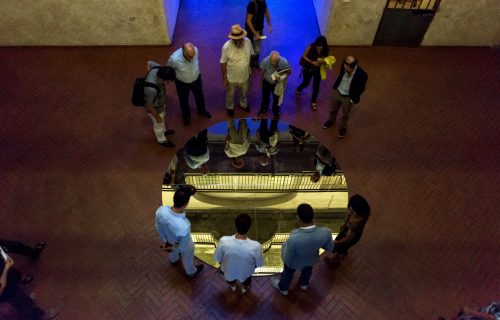 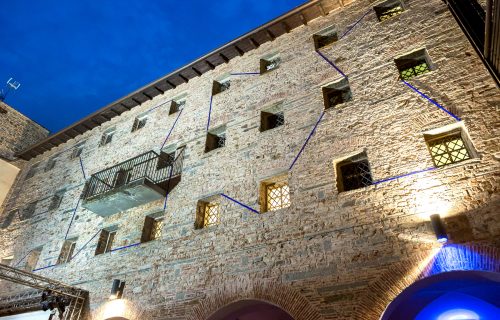 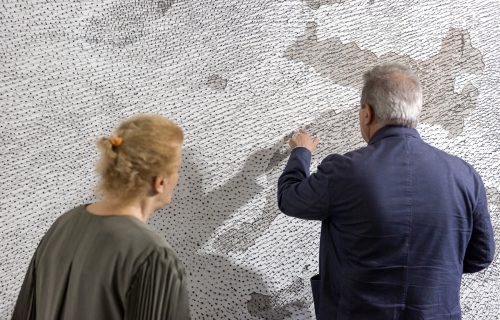 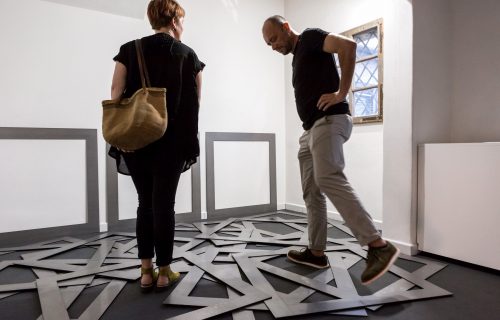 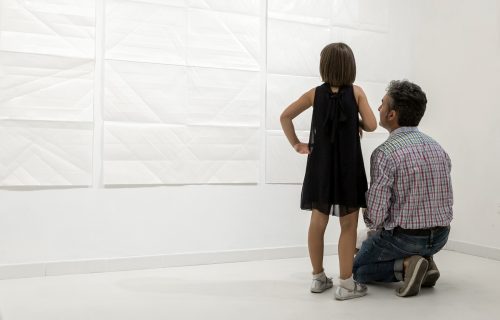 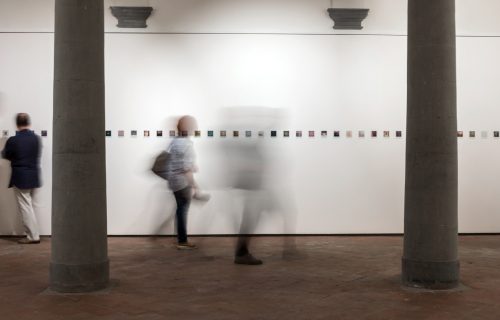 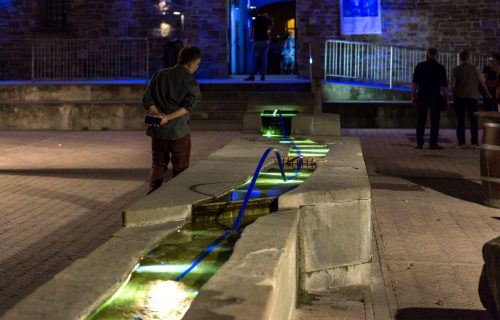 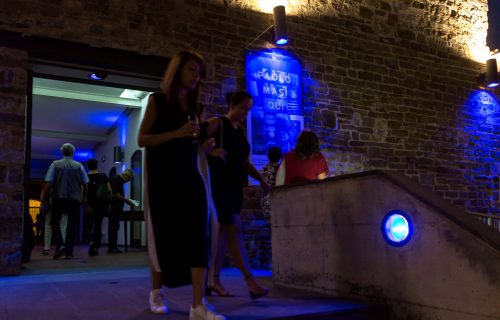 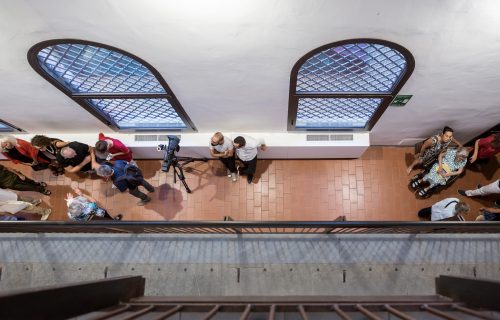